It’s easy to focus on the big impact, independently powerful cards in Shadows Over Innistrad.  It’s also easy to write off the awkward tribal cards that seem to lack the proper support in Standard.  Thalia’s Lieutenant will not likely see much play in standard due to lack of incentive to play the human “tribe” but just might be exactly what a Modern humans deck needs.

Unlike Vampires or Werewolves, the human creature type is printed in nearly every set in the history of Magic.  In fact, many times, lords and other human strategies appear in an even more focused fashion (ie-Mayor of Avabruck in Innistrad, Human Warrior archetypes in Khans, and Human Ally archetypes in Zendikar).  Modern gives us an opportunities to combine all the incentives of playing the creature type human into one deck but some important pieces have been missing.

Take Modern Merfolk, for example.  The deck is strong because of the many copies of Lord of Atlantis and Master of the Pearl Trident that you can run.  This gives a pilot a great reason to run Merfolk creatures because every lord-type creature increases their value automatically.  We’ve got reasons to play humans because of cards like Champion of the Parish and Mayor of Avabruck but the core of this sort of deck is clunky at best without a good, catch-all 2 cmc lord.  Thalia’s Lieutenant gives us just that.

Rather than brewing the deck, I’d like to just start the discussion today.  Please share your brews in the comments if you’re feeling ambitious.

There are TONS of tools that may encourage Thalia’s Lieutenant in Modern.  The main one that I can think of is Champion of the Parish. 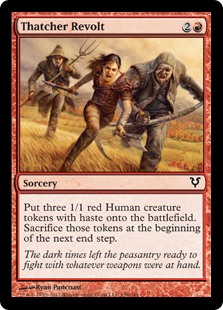 On the play, worst case scenario is facing down an opposing Wild Nacatal and Tarmogoyf or Eldrazi Mimic and Thought-Knot Seer.  Either way, both of your non-token creatures in the second scenario outclass, if not, trade with the defenders.

I’ll leave just leave that there…

Next, take a look at the other ‘lord’-type or ‘human tribal’ cards we have access to:

And some that are interesting to say the least:

Feeling overwhelmed?  I know I am…  This isn’t even all of them.  A keyword search for modern-legal cards with the creature type “human” will result in nearly 30 pages of results.  There’s got to be something there.

Here are a couple of cores that I came up with based on some of the most interesting interactions in this bunch.

While admittedly a little light on non-creature spells to trigger prowess, this style promotes a very aggressive ‘go-wide’ type of attack beginning with one of 10 possible one-drop creatures to be followed by a Gather the Townsfolk or Lieutenant.  While the deck may be weak to bad draws/mulligans, with the right tools, it can play a very explosive aggressive game.

4 Gather the Townsfolk
4 Path to Exile

Bloodsoaked Champion is a fantastic resilient threat capable of putting a lot of pressure on your opponent in early turns.  It’s raid ability trigger’s Thalia’s Lieutenant’s +1/+1 so attacking into a larger enemy defender just might be worth paying the 1B post combat just to grow your Lieutenants once a turn.  Another great option is Orzhov Pontif, a fantastic utility stat boost for your team or one sided board wipe when your opponent is banking on their army of Lingering Souls to keep them alive.

This is my favorite option of the three.  There seems to be the most natural support for a more mid-range plan that culminates in an lethal attack over top via Abzan Falconer.  Experiment One and Champion of the Parish, which are naturally two of the best one drop options, contributes to this plan automatically by growing with +1/+1 counters from the start.  I might even consider a Hardened Scales or two in this sort of build.

Another option in this same style would be to go even further with the midrange plan and run the following package:

I’ll leave you with some fantastic sideboard options with the keyword “human” conveniently included somewhere on the card (some may be repeats from above).  Happy brewing!