…Through the hard times and the good. I have to celebrate you baby. I have to praise you like I should. Grixis Control. The modern deck that excites me more than any I have ever played…and I’ve played a lot of them.

When I first had the idea to try Grixis control in Modern, Dragons of Tarkir hadn’t even been released yet. Kolaghan’s Command was not in charge of the format and the meta was basically UR Twin, Abzan, GR Tron and a bit of Gerrard Fabiano’s Sultai. I was flitting between Abzan and Sultai, but by the time Kolaghan’s Command appeared, I had all but given up on latter choice.

Whilst Fabiano’s deck had a strictly positive Twin matchup, owing to main deck disruption and Abrupt Decay, counter magic, and a clock which was good enough to force them to keep the combo in (or sideboard it out incorrectly and turn on your additional post-board permission even more), it was just glacial and struggled to maintain velocity against the midrange decks (mostly Abzan). Lingering Souls was a beating. Path to Exile was a beating (although less so since it got you to Cryptic Command quicker-your main way to not die to their board). Siege Rhino was a MASSIVE beating as it was often bigger than your Tarmogoyf with the added bonus of a Lightning Helix to the face. This deck was not the answer.

Twin was also not where I wanted to be. I had played a lot of combo in modern and had played UR and RUG Twin many times, as well as occasionally dabbling in the classic UWR Twin. These decks are excellent and their persistent dominance is testament to this. They have a clearly thought out, highly linear gameplan and are very streamlined towards achieving it. My main reason for not wanting to play Twin was simply that I find the mirror to be utterly miserable and I knew that if I sleeved up my Deciever Exarchs and Pestermites, I would be joining a lot of other people doing so. I couldn’t bear the thought of playing 3 Twin mirrors in a 6 round PPTQ. So no, not Twin.

The one, tiny, teensy, little thing that did make Twin feel attractive was that I really liked playing Lightning Bolts alongside blue cards like Snapcaster Mage. I had just developed a Grixis Delver list for my good friend Sam and, in the process, had come to realise how well positioned Terminate was. So almost by accident, Grixis fell on to my radar. I decided to start brewing a control deck.

I knew I wanted to focus on a few key concepts:

With this in mind, I set off to brew some really basic lists.  Many of these were full of “4-ofs” with only the Delve creatures and Cryptic Command really appearing in considered numbers. At the time, I was on Tomb Stalker and Tasigur – 3 and 2 respectively. I included 3 Commands.

These lists had their merits, but felt just a little bit short of being competitive. I also tried versions with 4 Bitterblossom and versions that were very heavy on Thoughtsieze and Inquisition of Kozilek, to no avail.

Then came Dragons of Tarkir and with it Kolaghan’s Command!

I marked the card for modern playability the second it was spoiled – boldly claiming openly to friends that I thought it could potentially redefine the format. Most of them were pretty indifferent to my claims – I’m just as often wrong as I am right, so they had no reason to form a bandwagon. A few thought I was crazy, a few thought I was a genius. I had spotted the Snapcaster Mage interaction but I had kept that information fairly quiet, hoping no-one would notice.

Off in a darkened corner I brewed this:

The Moment of Change

After this list, the way I was brewing Grixis changed dramatically. Whenever I brew, I always pay close attention to MTGO Daily results to see who is agreeing with me and who isn’t. I noticed quickly that I had done a lot of things right with my list, but that I had also made a lot of silly oversights.

Firstly, not having access to three, fetchable, basic Islands meant that I was never casting Cryptic Command through a resolved Bloodmoon.

Next was the main deck Ghost Quarters. In all my excitement about the Snapcaster Mage/Kolaghan’s Command interaction, I’d managed to overlook Fulminator Mage also being recurrable.  The inclusion of a colorless land created unnecessary challenges for my three-color deck

I was obsessed with Compulsive Research and that was something I severely needed to get over. The card is excellent when you’re flooded and already ahead, but how often does that situation actually occur? You’re quite right; pretty much never.

Finally and perhaps most seriously, my biggest mistake was my assumption that playing a bunch of high-impact one-ofs with all that cantrippery would be good. Conventional wisdom tells us that one-ofs are always at their best in decks that cantrip a lot, because you effectively get free redundant copies by nature of the number of cards you draw.  Also, you can cantrip into Snapcaster Mages to recur them.

The problem I wasn’t seeing, at this proto-stage, is that at its center, Grixis Control is NOT a Snapcaster Mage deck. It is a Kolaghan’s Command deck. The one-ofs with the most impact are the side-boarded one-of creatures, popularised by Michael A Jacob and Luis Scott-Vargas when they were developing the deck for the MTGO Modern Festival, this summer. These creature one-ofs allow you to set up intricate graveyard loops with Kolaghan’s Command and Snapcaster Mage to basically pull miles ahead, whilst technically drawing zero cards.

But why the creatures? 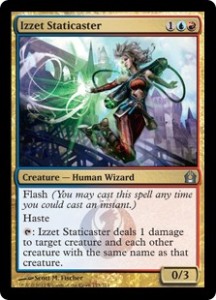 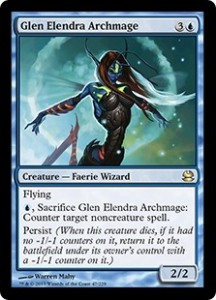 Of all the sideboard cards the two pros played, the ones I found to be best were Grave Titan, Mulldrifter, and Izzet Staticaster. If you notice, what they all have in common are the built-in card advantage. Grave Titan is effectively 3-5 cards, Mulldrifter is typically 2-3, and Izzet Staticaster is…well, the sky is the limit. MJ also argues firmly for the inclusion of Glen Elendra Archmage but I have found that to be less interesting. It’s a very easy card to play around and unlike the others it often does actual nothing when your opponent is on Path to Exile.

The real beauty of Grixis Control is that, without the 10-card Twin combo, or the necessity of playing 0-1 mana cantrips and interaction all day like its Twin and Delver counterparts, Grixis Control gets to really spend its time focused on Kolaghan’s Command and making it the best card it can possibly be.  Two effects for one and a half mana each, out of a list of 4 very relevant ones, is certainly something worth focusing on.

In recent times, with the release of Magic: Origins, brewers like Michael Majors have taken the creature-centric, Command-boosting nature of the deck even further, moving to a full four copies of Jace, Vryn’s Prodigy and leaning heavily on inquisition of Kozilek to help play protect the queen and to disrupt combo decks from the offset. The power of turn one fetch and Inquisition into turn two fetch and Jace into turn three Command, loot, flip Jace is absolutely ridiculous and whilst I agree with MJ (who stated recently on his Twitch stream that he believes 4 Jace is definitely incorrect) I do think the card has a very promising home in Grixis Control. My first attempt with it was a 1-1 split (main to board) and I was not disappointed.

I would love to hear what interesting things you are brewing with, in Grixis Control. Maybe I’ve missed something that is super cool. With such a “toolboxy” deck that has so many options available to it, it seems to me like this archetype is here to stay, purely on merits of just how flexible it is.

Oh, and for the record, I’m currently playing Grixis Twin. Enough people have moved off it that I wanted to get free wins for a while and didn’t have to fear the mirror! Hahahaha Suckers!

Drop me a line on Twitter @mrshy85 and fill me in on those cool Grixis Control ideas. I’m dying for an excuse to put away my Duel Decks Remands and get out my foil Mana Leaks.