In the words of the immortal Katheryn Elizabeth Hudson…

I am surely not alone when I say that I have a ‘hot and cold’ relationship with Delver of Secrets in Modern.  Without enablers like Brainstorm, modern players are forced to set up Delver flips with Serum Visions or (ick!) Snapcaster to flashback Serum Visions or… uh…”lucking out”.  While this can be maddening, the upside just might be worthwhile and Plan C, luck, may be the most common avenue.

Tangent Alert-One of my favorite ways of flipping a delver has got to be scrying a Lightning Bolt to the top of my deck post-mulligan when I’m on the draw (pro tip-you’ll need a basic island or blue shock land for this to work).

I’ve been enjoying some success in Modern leagues lately with Grixis Delve registering 8-2 over two leagues.  My two losses came from Suicide Zoo and Tron; decks that I would consider beatable if things go well…they didn’t.

In the past, we’ve seen Delver built with creature suites that include Yong Pyromancer and Snapcaster.  These decks existed mainly when Chapin’s Grixis Control was popular-a similar 75 with NO DELVERS and an overall slower plan involving delve creatures like Tasigur and larger control pieces like Cryptic Command.  Often times for the Delver versions, the bad luck that came along with sketchy Delver lines was compounded by bad variance at the hand of Young Pyromancer – another debatably  high-variance card.

Pyromancer is an inconsistent beater on its own and only gets good when it can generate token advantage via removal spells for your opponents creatures or counterspells for their proactive plays.  In some environments, your opponent is piloting a REactive deck strategy and will simply shrug his shoulders and poop out a Lightning Bolt for your little guy.  In a meta where Path to Exiles are few (Jund, Tron, Infect, Burn, Coco, Affinity, Scapeshift, Burn, and Zoo among the top 10 most played decks), options like Gurmag Angler and Tasigur have a better chance of sticking around and making a much bigger impact.

This is why I have opted for a plan that looks like a weird amalgamation of the two Grixis styles played in the past (and many others have done the same – see results).  You have options for explosive Delver plays but when things don’t go as planned, the long game looks a lot better.

And just for fun, here’s the curve.  Our 6 and 7-cmc outliers are Tasigur and Gurmag so there really isn’t anything beyond 3 cmc.

I feel pretty strongly about the 60 cards in the main.  I’ll point out a few highlights as well as possible changes…

I love this card here and would potentially add another in the sideboard.  Obviously comparable to the three Terminates also included, the drawback of sorcery speed is well worth it when you have the option of dealing with cards like Nahiri or Karn.  Tron can be a tough match-up if you don’t start out with enough gas to apply the right kinds of pressure.  YOU CAN survive a resolved Karn as it will typically only take out one of your Delvers or Tasigurs.  A single Dreadbore can spare a much needed Lightning Bolt which can prove to be vital in going over top Tron’s ridiculously boisterous threats (ie-Ulamog or Wurmcoil) and is even better when your opponent activates Karn’s +4.  There is really no catching up from that.

As far as the Nahiri match-up goes, things are pretty self explanatory.  Nahiri adds two loyalty a turn.  This is a lot and it’s really not worth committing combat damage and bolt damage to her when you really need to be closing in on the red zone.  Dreadbore can buy you a few more turns.

This card is obviously powerful.  Late game it can be used for unreasonable Snapcaster shenanigans.  It can make Affinity players very sad.  It kills Spellskite.  It can deal that last two points of damage needed to win the game.  BUT it cost three mana in a deck that runs 19 lands.  Yes-you’ll get there.  No-it’s not always relevant when you do.  I like having Kolaghan’s Command in the deck for obvious reasons but I am finding that three just might be too much.  With 19 lands, and many of them being fetches, hitting 5 mana for a Snapcaster – K Command flashback seems like a pipe dream.  In a lot of games, I am happy to keep a one-lander.  I might consider main-decking one Rakdos Charm in place of one Kolaghan’s Command.  I’ll explain that later… 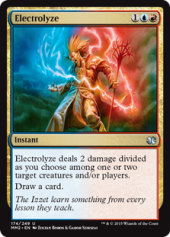 Do you know what I love doing with Electrolyze?  Killing two Snapcaster Mages and drawing a card.  That’s a three-for-one!  Or is it?  Both of those Snapcasters likely enabled some awful flashback.  That probably hurt.

Do you know what’s really good against Snapcaster?  Spell Snare!  It’s also very good against some other friends: Tarmogoyf, Voice of Resurgence, Cranial Plating, Atarka’s Command, Mana Leak to name a few.  That said, I might just consider a third Spell Snare in place of the Electrolyze.  Again, 19 lands…

I am really happy with the sideboard and don’t really want to change anything here.  I’ll touch on a few of those inclusions now. 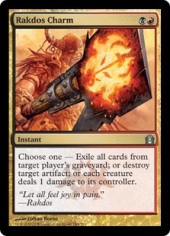 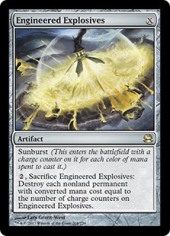 This is a great-catch all.  There are many times where you aren’t sure what awful sideboard plan your opponent has in store for you.  A lot of times, those terrible things are enchantments…Choke, Rest in Peace, Blood Moon.  If you don’t draw a Countersquall or similar in time to deal with these, knowing that there is an Engineered Explosives somewhere in your deck gives you some hope for the future.  Admittedly, this isn’t an ideal plan.  If your opponent is on Choke or Blood Moon, 3 mana or 3 mana of different colors can be hard to come by.  Plan ahead.

Against zoo or suicide zoo, having your finger on the trigger of an Engineered Explosives with one counter can keep them from rushing you with too many Goblin Guides, Nacatls, or Kird Apes. 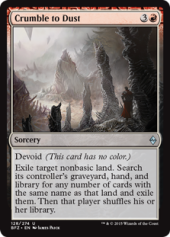 This card can be really good.  It can also be 4 mana when your opponent is dropping a natural “tron-fecta” on turn three.  For that reason, Molten Rain miiiiiiiiight bump this card out of the side.  For now, I’m going to keep it and see how many more times I can lose to Tron before I ditch it.

That’s all for now.  Let me know your experiences in the comments OR, even better, email us at cardknocklifepodcast@gmail.com.