We’ve got two full weeks of BFZ Standard under our belt and not one ramp strategy has broken into the top 8.  We have seen 0 Ulamogs, 0 Ugins, and 0 Void Winnowers so far.  But why!?  Is it possible that the best curve topper for a ramp deck hasn’t been discovered yet?  This card is way too powerful for the lack of love its getting right now… 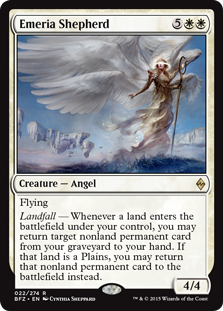 Emeria Shepherd’s base stats are quite lackluster…7 cmc for a 4/4 flyer?  I can see why it is being overlooked.

It’s trigger ability, however, is one of the strongest ever printed.  If you assume that Emeria Shepherd is virtual 8-drop, you can net three threats from one single play (via a fetch land drop and crack for a plains).  It’s ability to return a nonland permanent of any type is unprecedented.  This free and repeatable trigger reminds me of another large white creature that we met during our last trip to Zendikar standard.

In fact, Sun Titan appeared in a standard W Ramp deck during this time along with quite a few other cards that have recently been reprinted or…”functionally” reprinted (air quotes because some are strictly worse).

First, take a look at the deck…

This deck used ramp creatures like Pilgrim’s Eye (and occasionally Kor Cartographer) to reach six lands.  This would allow you to either cast Sun Titan and spam the enters-the-battlefield triggers on cards like Stoneforge Mystic or Wall of Omens in order to fetch out the sword of choice and commence the beats.  Once Emeria, Sky Ruin was online, the engine became event more resilient to removal and wrath spells and the pilot could rebuild a relatively scary board state very quickly.

While we don’t have Stoneforge and the Scars swords in our current Standard, we do have a lot of scary midrange creatures and planeswalkers to recur.

The beauty of Emeria Shepherd’s trigger is twofold…

1-It is not restricted to “3 cmc or less”.  This means that you can play Gideon, -4 Gideon, reanimate Gideon, and activate him for a second time (possibly another emblem?) all in one turn.  Excellent.

2-A landfall trigger with a plains gives you an option to return the creature to your hand OR the battlefield.  This makes creatures like Den Protector, who you’d want to cast morphed rather than return directly to the battlefield, much more appealing.

Breaking Down the Deck

Something I’ve toyed with, though I’m not quite sure it isn’t too ‘cute’ in this sort of deck, is Silumgar Sorcerer.  Since Silumgar Sorcerer can exploit itself for its “remove soul” effect, it allows you to place it directly into your graveyard.  This way, every live fetch land becomes a free counterspell.

The double blue in Silumgar Sorcerer’s cost was a little concerning to me as I had originally wanted to keep the deck mono white.  Fortunately, the two colors I had considered splashing for had both a fetch land and a battle land that shared white in common.  That way, I could run a mana base where every single land was a plains (best use of Emeria Shepherd’s ability) and I would still have access to my splash colors with very little draw back.  I had already intended on running as many white fetch lands as I could in order to trigger landfall.

I did, however, manage to very awkwardly squeeze one copy of Nissa, Vastwood Seer into the deck.  To do this, I learned from a very embarrassing test run that I would need to run at least one main deck basic forest (and probably even more are necessary).  As forced as this seemed, my experiences with Nissa during testing solidified her spot.  While it’s most obvious function is to fetch a forest for ramp and landfall, I found that her chance to spark into planeswalker form came pretty consistently alongside Pilgrim’s Eye, Explosive Vegetation, and lots of fetch lands.  Once flipped, Nissa’s +1 ability has a chance to trigger additional Emeria landfalls.

The deck runs enough gas to function without any Emeria Shepherd shenanigans at all and can simply send Archangel of Tithes and Dragonlord Ojutai flying over low-to-the-ground midrange creatures for lethal damage.  Things get really explosive (pun intended…Explosive Vegetation, get it?) when you can untap with Emeria in play.

As previously mentioned, you typically will want to play Emeria Shepherd on turn 8 when you can also drop a fetch land for two reanimate triggers.  When you are free to use all of your mana to abuse this ability, there are a number of ways to squeeze multiple land drop triggers into one turn.

When permanents like Gideon, Ally of Zendikar can immediately place themselves in the graveyard to great benefit, for example a +1/+1 emblem, these landfall triggers tend to add up fast.  Eventually, your Pilgrim’s Eyes are looking scary…

So there it is!  Version 1.0.  I’m sure that I’m missing something so please tell me any ideas you might have in the comment section.

Thanks for reading.  Catch you next time!