Fathom Feeder is the most underrated card in Battle for Zendikar.

While many players are calling this a ‘weaker’ Baleful Strix, I see it as quite a different source of card advantage and utility.  Let’s break it down based on its four lines of text…

Devoid: This is subtly useful if the card is played alongside something like Ghostfire Blade or Dominator Drone.  Building the ‘colorless strategy’ in a standard construction deck seems to be a natural fit for artifact all-stars like Hangarback Walker.  While I included Hangarback Walker in my deck, I did so only for it’s incredible value and ability to generate early blockers and flying attackers.  I am mostly not concerned with the Devoid aspects of Fathom Feeder in this case but it’s certainly something to look at in other builds.

Deathtouch: Besides being able to trade with an attacker of any size (I’m looking at you, Siege Rhino), Fathom Feeder’s deathtouch encourages players not to block.  It is hard to justify losing a sizable creature to prevent one damage so often times, the ingest just ‘gets there’.  We’ll talk about how useful that is next.

Sidebar-loving the interaction of Ojutai’s Command and Fathom Feeder for a surprise blocker.  We’ll build Esper Eldrazi next time!

Ingest: Cards in your opponent’s exile will function much like one-time use mana sources for valuable ‘kicker spells’ in your Eldrazi deck.  Some of my favorite processors can be incredibly backbreaking when the opponent’s exile is piling up.  In my sultai deck, I run Oblivion Sower as a primary source of ramp.  Two things to remember about the Sower:

Of course, on its own, Fathom Feeder may not be enough to build a deck full of Eldrazi processors.  Fortunately, there are plenty of useful removal spells and counters that exile your opponent’s cards. 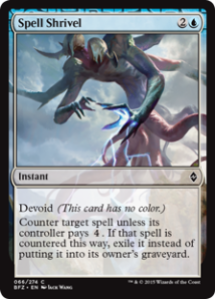 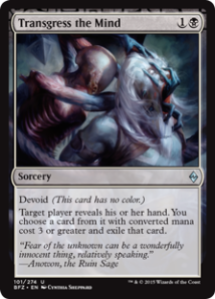 One shortfall of my list is its inability to exile an opposing Hangarback Walker.  As much as I want to run a card like Complete Disregard for this situation, it only leaves you a small window of time to cast it at 3 CMC before the Walker has grown out of range.  As an alternative, we can ramp up to Ulamog and exile it.  Obviously not an ideal answer…still looking…

My theory behind the ramp here is to play spells that are more versatile than strict ramp spells like Explosive Vegetation or ‘mana dorks’.  For example, From Beyond.  While this card’s primary function here is to produce one-time use mana for big payoff spells, it can function similar to a planeswalker with a loyalty ability of “0: Make a creature token”.  The 1 power that these tokens have is not a negligible difference it’s original Zendikar version, Awakening Zone.  In a deck that plays a long game, these 1/1’s can overwhelm an opponent for the win.

The best function of From Beyond is its ability to sacrifice to search out an Eldrazi spell.  This allows you to play singleton Eldrazi spells in your deck that would otherwise crowd your hand in the early turns.  One of my favorite interactions is to sacrifice to search out an Ulamog’s Nullifier and cast it in the same turn to counter a crucial spell.  From Beyond can also find your single Ulamog or Void Winnower (from the sideboard) for the big payoff. 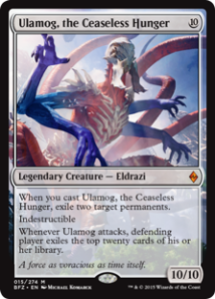 1 Hedron Archive
3 From Beyond

Thanks for reading!  Leave your ideas in the comments section!